You are here HomeTravelUnique and charming, top destinations to visit in 2016

The top ten is made, mainly, by cities and landscapes of Asia and Eastern Europe. Little known, they are noted for their rich cultural heritage.

Here we offer the top 10 world destinations, a top ten, have to say, occupied by parts of Asia and Eastern Europe. The best in Africa, North America, South America and Oceania are also added. 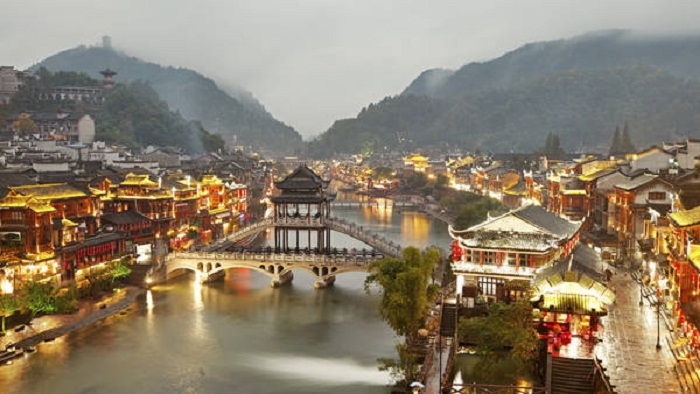 The best place to travel in 2016 is this little old town of wooden houses, along the Tuojiang River in the Chinese province of Hunan. The town, considered one of the most beautiful in the country, is a World Heritage Site. Strolling around Fenghuang is going back in time. Some of its buildings and streets, perfectly preserved, reflect the beauty of the buildings of the Ming and Qing dynasties. For visitors there are numerous establishments that offer lodging, restaurants to eat and boats that offer tours to contemplate the beauty of the place without hurry.

The most common image and symbol of Mostar’s Old Bridge -Stari Most-, a construction that crosses the Neretva River, whose beauty, history and symbolism attracts tourists from around the world. The viaduct, which was destroyed in 1993 during the war in the former Yugoslavia and rebuilt eleven years later, offers a spectacular image that was once a cosmopolitan city of the Ottoman Empire. By the bridge, the old town spreads out in a maze of medieval streets, mosques, historical buildings and craft stalls, where you can taste Cevapi -especialidad made with ground beef, bread and onion-or any of the delicious sweets. But if one moves away from the center you will find that the footprint of war is still present in walls and destroyed buildings.

Locate less than three hours from Sofia, is the cultural center of the north and retains many buildings from its heyday as the citadel of Tsarevets -and their fortress-which dominates the city from the top of a hill, offering spectacular views of the ancient capital and the Yantra River.

Must visit Asenova district, an area full of charm and history area, churches, domes of bronze and viewpoints, its wooden bridge and, of course, the old bazaar.

There is celebrated the Exit Festival, the summer musical event in 2013 was named Best European Festival. The city, a hundred kilometers from the Serbian capital has on the Danube and the Petrovaradin Fortress main hallmarks. Novi Sad has an attractive historical center of noble buildings like the Town Hall or both Catholic and orthodox cathedrals-the streets and bohemian atmosphere full of bookshops, cafes and restaurants where you can sample some of the delicious dishes of the cuisine Serbian.

It is a medieval walled town situated halfway between Beijing and Xian. Perfectly preserved stone houses, streets and the spectacular six-kilometer wall that surrounds allow relive what it was this booming Chinese city, which was once a major financial center.

The fifth best destination for travel in 2016 surprises with its exquisiteness. In addition to the wall, visitors can walk the streets -the most emblematic is Nan Dajie- and visit treasures such as the House of Qiao Family Zhengou temples and Shuanglin, or Rishengchang Bank. When night falls, the red lights illuminate the city, offering both spectacular and intimate image.

Despite being in the Romanian region of Transylvania, when you travel to Sibiu has the feeling of being in Germany. And this perfectly preserved medieval city -the historic center is a World Heritage Site keeps its Germanic roots still visible.

Sibu in the upper town, where it is most historic sites, and the lower town, with cobbled streets and colorful buildings with original windows on the roofs stands. The Great Clock square, or plaza, where the Clock Tower and the Museum of Art Samuel Bruckenthal, in which frontline universal paint exposed, and Little Square, with its Baroque Catholic church is are essential scenarios to visit the town.

A little over 200 kilometers from Moscow, Suzdal is a small town founded in the eleventh century of just over 11,000 inhabitants known among other reasons for its scenery and its many colorful domes. Some of his monuments -the strength, the Monastery of Saint Euthymius and Church of Saints Boris and Gleb-, along with the neighboring town of Vladimir, are listed as World Heritage.

Visitors should take the opportunity to try the famous steam baths, buy traditional crafts and try some of the gastronomic specialties of the area, as shchi, a typical Russian soup, or kvas, an alcoholic drink low alcohol.

Beautiful, cultured, this Hungarian town is 200 kilometers from the capital. The city was Cultural Capital of Europe in 2010 and can boast one of the oldest universities in the continent, created in 1367. Stroll the streets and squares of Pécs are a pleasure.

Must: constructions especially baroque and neoclassical mustard tones; emblematic as the old mosque of Gazi Kaszim (now a church) buildings; Early Christian Necropolis, the old fortress, from which you can enjoy extraordinary views, theaters, numerous cafes and the famous pottery factory.

It is one of the most beautiful regions of the state of Kerala in the Western Ghats Sahyadri- well-known as the mountains, the hills of southwestern India. The area is a nature reserve with well-preserved lush vegetation that has a spectacular biodiversity where tigers, monkeys, elephants, and many different species of birds are found. Besides spectacular photo safaris, visitors to Wayanad discover prehistoric engravings dating from the Neolithic, extensive spice plantations and lush forests.

In the province of Yunnan, just over 300 kilometers from the capital Kunming, this village is one of the pearls of Southern China. And it is that Dali is a little paradise bathed by the waters of Lake Erhai, frequented by local tourists, who lost becomes a delight. The Chongsheng Temple, known as the three pagodas-, a spectacular building: among its treasures an old town with cobbled streets and low buildings surrounded by a wall with four large doors and, above all, one of their temples stands IX century.