MarkDown is love, it is an easy to read and easy to write language that makes it easier to format text without having to use HTML. It is widely used by people writing on the Internet, such as the servers we generate content on this blog, and is also widely used to document code or simply to edit documents without complications and without having to learn a lot of HTML tags. 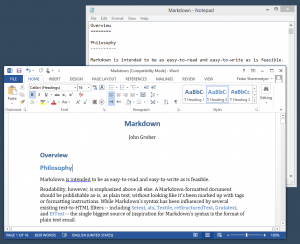 There are many MarkDown text editors specially designed to take advantage of this language, they are usually quite minimalist and to the point. However, we know that the most used text editor on the planet is simply Microsoft Word, and this, by default and unfortunately, does not support MarkDown. This is where the Writage plugin comes in to solve that problem.

Many people are so accustomed to Word that they never think of the crazy idea of writing a document in another application and much less learn a new language to format, if there are in Word so cute buttons. Anyone who has written text for the web knows that writing it in Word and then paste it without first removing all the formatting that the Microsoft program adds, is usually a disaster.

Now, if we have the ability to open MarkDown documents inside Word and save documents with that format from the Office badge program, life will be better. Writeage basically adds to Word a function to convert files from .doc to MarkDown and vice versa.

When installing Writage in your computer you will have the option to open from Office any document written in MarkDown, in Word you will see the text with the format that was given to him, not in MarkDown language. You can also save any document you write in Word in MarkDown format, that is, with the .MD extension.

You do not even have to write in MarkDown, you can add text formatting to Word’s visual tools and when you save the document in .MD thanks to the plugin, it will automatically convert to MarkDown. Writeage is currently in active development, and for now will be free. It is compatible with Office 2007/2010/2013/2016 in Windows.