You are here HomeTechnology News15% of Twitter users are bots according to a study, and they like to interact with each other

The next time you’re going to talk to a stranger on Twitter, you think you have up to 15% chance that it’s a bot. So we have that is what says a study conducted by the University of Southern California and Indiana, where they have analyzed not only the number of bots that are in the social network, but also their behavior.

This would represent almost 48 million bots among the 319 million active accounts that Twitter said at the end of last year. But the study not only seeks to know the total number of bots that inhabit the social network, but also understand how they behave in it and how they interact with the rest of accounts. 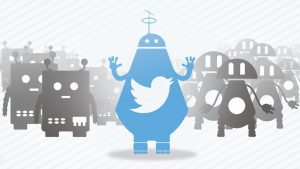 “Growing evidence suggests that an increasing amount of content on social networks is generated by autonomous entities known as social bots,” they say in the introduction to the study. “In this paper we present a framework to detect these entities on Twitter.”

It is this growing use of bots that aroused the curiosity of the researchers and led them to conduct their study. It is true that the number of bots that have managed to find is striking, since it is between 9% and 15% of total users , but so are other data such as these automatism prefer to interact with each other to emulate the behavior of human users, and thus be more difficult to detect.

Bots that speak with bots to pretend humanity

To carry out the study, researchers at both universities used public Twitter metadata . These include for example the friend lists of the users, the content and sentiment of the tweets, the network patterns and the activity schedules. They have compared them with those in known bots to find patterns of use and thus be able to detect which accounts are not human.

In fact, the study explains very widely the different methods they have used to detect the bots and the error rates that have made them calculate the results. They also explain how Twitter accounts have been categorized from 0.0 to 1.0 to differentiate between humans and different types of automatism.

In the following graphs you will see in fact this type of classification depending on the percentage of possibilities that an account is a bot. Therefore, from 0.0 to 0.4 represents human users, from 0.4 to 0.8 we have sophisticated bots, which may correspond to hybrid or more complex automations, and the range from 0.8 to 1.0 are simple and automatic bots.

In this first graph we can see the differences between how humans relate and how bots do it. For example, the darker line belongs to the values 0.0 and 0.1, which are 100% human accounts . The highest peak of this line in both graphs is in the position between 0.0 and 0.2, which means that those who follow them are mainly other humans.

We can also see a curious thing in the “Followers” graphic, which is that the darkest line of humans has a second peak in the 0.5 area. This means that the most sophisticated bots or hybrids also tend to follow humans , although as we will see later, the interactions between the two are very different.

On the other hand, it is also surprising that the clearest line, that of 0.9 to 1.0 belonging to simple bots, has a small peak in the area of the graph that represents humans. This means that human users also like to follow bots . In fact, I am sure many of you are perfectly aware that you are doing it.

And why does this happen? Well, because many of these bots are benign and provide useful information. They can be for example blog feeds or specific information media, so many users will follow them to be aware of the latest news or articles they share on the social network.

In this second graph, the flow of information is analyzed in terms of mentions and retweets. In it we can see how the simplest bots (0.8 – 1.0) tend to retweet between them. But if we look at the orange lines, that of the more sophisticated bots, we will see that these also receive retweets from these simpler bots.

However, the thing changes at the time of the mentions, since humans lose interest in mentioning the bots and focus almost exclusively on the humans themselves. The feeling is mutual since the simplest bots, those of the clearest lines, also show an almost total disinterest in interacting with humans.

The bots do not try to cheat you, yet

This leads us to conclude that yes, Twitter can have millions of bot accounts, but these usually are not yet able to perform advanced interactions with human users. Instead they prefer to talk to themselves to make them look more human and more difficult to detect, and they retweet to promote the content they are promoting.

Therefore, although they take measures to avoid being expelled, we are still not at a point where bots usually try to deceive us and make us believe that we are people. It remains to be seen if this will change in the future or not as technology allows them to better understand our interactions and how to react to them.

Those who take the cake however are the hybrid or semi-automatic accounts, since they get a fairly high rate of retweets in the social network . However, these last graphs show that although users like to share their content, what we do not usually bother doing is to interact with them.