You are here HomeGeneralWhere did pizza originate?

Over five billion pizzas are eaten every day worldwide, but do we know where it was originally created?

Legend would have it that in 1889, Raffaele Esposito – working in Pizzeria di Pietro in Naples – baked three pizzas for the visiting king and queen, Umberto I and Margherita of Savoy. Esposito baked one of the pizzas to represent the Italian flag, using tomatoes, mozzarella and basil for the red, white and green. This pizza was an instant hit with the queen and was forever named in her honour, giving us the ever-popular margherita pizza.

Whilst Naples staunchly clings to its claim to the invention of the popular flatbread, the Telegraph reports that an Italian food historian has evidence that the word ‘pizza’ may first have been used not in Naples but in Gaeta, 80 kilometres to the north-west. In a Latin document dating back to 997CE, the word ‘pizze’ is listed along with many other foods that tenants of a mill were to provide as a tithe to the archbishops of Gaeta every year.

This is an engaging tale, but pizza in one form or another has been around for a lot longer than this. Foods similar to pizza have been traced back as far as the Neolithic age. The French, Greek and Italians can all trace variations of flatbreads topped with flavourings back though their history, some as far back as 7,000 years. China and India both also have variations of flatbreads that are topped or filled with flavourings. 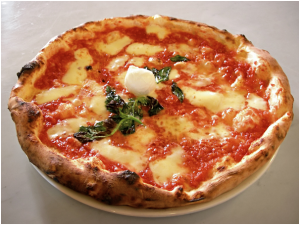 Today, pizza to most of us is a circular flatbread of varying depth, topped with a tomato sauce, mozzarella, and whole host of toppings to suit every taste. Pizza restaurants and food chains around the world contribute to the $709bn (£549bn) a year industry, with Americans eating approximately 100 acres of pizza every day. It would be difficult to visit any town or city in the world and not be able to find a variation of the modern pizza; for example, it is served in some of the best restaurants in Dublin, such as http://www.forno500.ie/.

We don’t really mind who invented the tasty cheese and tomato bread – we are just glad that it is here to stay in all its shapes and flavours, ready to satisfy the needs of even the most discerning foodie.