You are here HomeGeneralThe growth of Cheltenham as a spa town

Cheltenham is a thriving town with an incredible shopping district and the relatively new area of the Brewery filled with a variety of options for entertainment and places to eat. It is no wonder that more and more people are looking to move to the area. If you are searching online for Sell my property online in Cheltenham, then you should take a look at www.ocheltenham.co.uk to see how they can help you.

Did you know that Cheltenham originally began as an Anglo-Saxon settlement? Although not much is known about the town before its spa heyday it is thought that there was once a 9th Century monastery located in the area and there are records of the town being given a market charter back in 1226 – this would have allowed the town to further increase in size.

It is the period of the 18th Century where the stories and growth in popularity of Cheltenham really start to become apparent. The story behind the discovery of the much sought-after springs is that the local people had been watching a group of pigeons that seemed to frequent one of the natural springs and noticed how healthy they looked. It wasn’t long after this that the locals decided to try the water from the spring themselves. They enjoyed this so much that the farmer who owned the land that the spring was situated on decided to have a pump installed to make it easier to get to the water and decided to start charging people to use the pump. 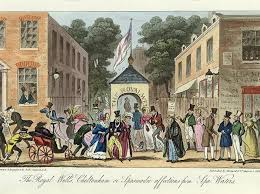 Cheltenham became the largest town in Gloucestershire by the end of 1850 and many influential people visited the area including Jane Austen, Samuel Johnson and King George III. Many of them came to enjoy the spa waters. By this time there were a number of location where this could be done. The original spa was located on the current site of Cheltenham Ladies College with other locations at the Pittville Pump Rooms and in Montpellier.

With large numbers of people visiting the town for the spas it was not long before, in the 19th Century, shopping districts like the Promenade were established along with the Assembly Rooms and the Theatre Royal to provide entertainment both for the visitors and the thriving society that had established themselves in the area.

Cheltenham was well on its way to becoming the bustling town that we now know today.