You are here HomeGeneralRobin Hood: Fact or Fiction?

There are so many tales surrounding the legend of Robin Hood that there must be some truth to the fact that he did exist. Whether he really was an outlaw who lived in Sherwood Forest is something we will never know for sure. He is depicted in Hollywood as handsome, brave and a champion of the poor. A heroic outlaw who fought for those who were oppressed by the rich and was skilled in archery and swordsmanship. Unfortunately for historians, both the names of Robin and Hood were very common during the Medieval ages and records show quite a few of these Robin Hood’s who had also been in trouble with the law. So nobody can say for sure, who the real Robin Hood was.

Robin Hood was not alone in his exploits and his band of Merry Men included Little John, Friar Tuck, Will Scarlet, Alan-a-Dale and Much the Miller’s Son. He had some enemies too in the figures of Sir Guy of Gisborne and most famously, the Sheriff of Nottingham. The Sheriff’s job was to catch outlaws like Robin Hood and to ensure the safety of routes through Sherwood Forest. 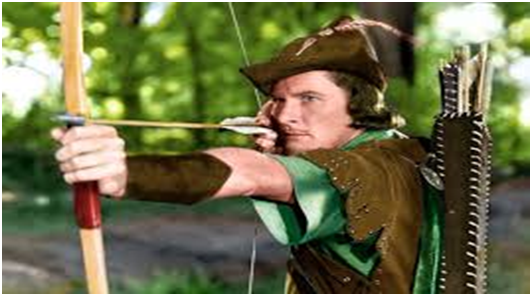 Robin Hood and his Merry Men wouldn’t have had too much trouble robbing from the rich and giving to the poor if they had been able to get their hands on a tank. Can you imagine how hard it would have been for the Sheriff of Nottingham to capture Robin Hood while he’s poking his head out of the turret and firing his bow and arrow. Well, forget the bow and arrow, he could just use the mounted machine guns! Imagine how much booty you could fit into a tank? More than enough to redistribute the wealth to some of Sherwood’s forgotten families. For your very own unique Nottingham Tank Driving Experience, visit https://www.armourgeddon.co.uk/

Just recently, a very lucky chap with a metal detector found a stunning Medieval gold ring in Sherwood Forest. The gold ring which is engraved with an infant Christ and a female Saint is said to be from the 14th century and could be worth around £70,000. Could this be evidence that Robin Hood really did have a hoard of riches in Sherwood?

Maid Marian remains a bit of a myth it seems. It is probably the case that she was added to the story at a later date as she does not appear in any of the early stories about Robin Hood. During this time, Catholicism was the religion of the land but after the Reformation, when England became a Protestant country, it seems that writers thought Robin’s devotion to the Virgin Mary was no longer acceptable and so introduced Maid Marian as his primary love interest.

Other myths include Robin being a dispossessed noble. A piece of writing in the 1530’s reffered to Robin as a nobilis exlex (a noble outlaw) and this might be where the idea came from. Historians now believe that this simply meant that he had noble ideas and was high minded.