You are here HomeGeneralCastle Ward a property the two faces

The National Trust as many glorious properties in Northern Ireland.  As luck, or judgment would have it three are in close proximity to each other.  They nestle around Strangford Loch county down.  These are Rowallane Gardens, Mount Stewart and the architectural curiosity of Castle Ward.  The property is also rightly famous for being the site of Winterfell from Game of Thrones. 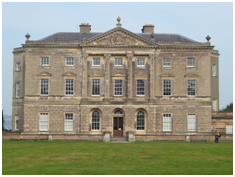 Places to be a castle but that has fallen into ruin.  It was cited as a plot of land perfect for a house by Bernard Ward the son of a respected surveyor in 1570.  He set about building three houses.  The one that stands today is of great architectural interest.  It also shows what you can do when you’re absolutely loaded and can afford a few house changes.  The southwest façade is in the classical style.  What this means is that it has all the features of a classical appearance.  The windows are rectangular and mullioned.  There is the usual columns that support for pediment which is a triangle and has that Roman/Greek empire look going on.

By contrast the north east side is different.  So different in fact you’d be forgiven for thinking that you were looking at a different house altogether.  This side favours the more gothic style which means we see pointed windows, battlements (it is castle ward after all) and finials.  What a finial it you ask?  It’s the decorative cup of a pinnacle or flagpole.  The Wards went for something that looks like a vast. 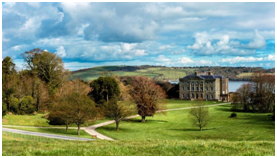 Why bother?  It seems that Lord Bangor was of one opinion and his wife the other.  As a compromise one got one side and one of the other.  Amazing to think what some people do to keep the relationship together!  The property he stayed in the hands of the Wards for many years before that old issues of aristocracy came to haunt them.  The second of Viscount of Bangor was quite mad and his younger brother died before the house could be transferred.  The youngest brother was no fool and soon had the second Viscount out and into a smaller place miles away.  The then flogged everything in the house.  I came back to the wards in 187 and words restored and refurbished.  By 1950 death duties and estate running costs were too much for the family so they took be standard approach of binning it off to the National Trust who said yes!