You are here HomeFashionPoirot: A Legend in the Moustache Community

“Dad,” says the boy, “how do I make my mark in the world?” The father ponders for a bit and says, “Son, if you are to be remembered among other men, then get a moustache named after you.” Sounds silly? How many moustaches can you name? The Poncho Villa, the Salvador Dali, the Chaplin, the Fu Manchu, the Groucho Marx or the Errol Flynn. Moustaches have proper names such as “the chevron”, but we prefer to call it the Magnum or Tom Selleck. Some people sport a handlebar with a soul patch, but most people just call it a Doc Holiday. 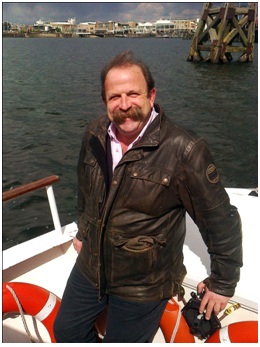 It is curious how a particular style of moustache becomes indelibly linked to a person, making both the man and his moustache iconic. This rings true for both the real moustachioed gentlemen and the fictional ones. One such fictional character stands-out from the rest – the man that Agatha Christie described as having “the finest moustache in England.” This is of course her creation, Hercule Poirot.

A writer describes and the reader imagines, but the film-maker shows things and the audience shares the perception. Agatha Christie tells us about Poirot’s legendary moustache, but it was David Suchet who showed it over 25 years of portraying the character on ITV. The creators of the series did their best to follow Agatha Christie’s description in her book Murder On the Orient Express and were able to transform a brief passage to iconic status through the long-running series.

A moustache is not merely a prop. It creates an image that sends a message. In the case of Poirot, his short, meticulously groomed handlebar moustache tells the audience that this is a fastidious man. He has an eye for detail and values order and symmetry. All these qualities are essential for a detective. David Suchet has described the moustache as essential for getting into character for the role.

Cultivating a legendary moustache like that of Poirot takes practice, a degree of artistry and the right grooming aids. There is no need for a moustache snood, but a good moustache wax is essential. There are several moustache wax brands available on the internet, and it should not take long to find the right one.

A little practice then is all it takes to sculpt an icon.