Last August KDE announced that it added to the race for the convergence between desktop and mobile. But not to compete with any operating system as Canonical or Microsoft tried, but to create a framework in which to develop convergent Qt-based applications capable of operating on major mobile and desktop operating systems, including Android and iOS. 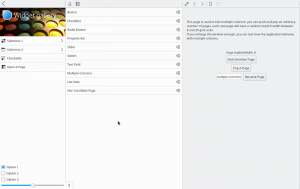 The framework presented for this is called Kirigami UI, and after the first tests have presented the first beta of its second version. In it, the KDE team promises better keyboard navigation for desktop applications and better integration with the design lines of Material Design on Android.

The beta of Kirigami 2.0 has received support for Qt Quick Controls 2, a new standard of controls for graphical interfaces presented last summer by Qt. This improved framework gives developers a greater number of controls, as well as improvements in performance and stability when designing their applications.

There are also improvements in Reachability & Overscroll mode, which lets you lower the top of a page to the center of the screen to make it easier to reach with your thumb when using it on a mobile. In addition the handling of the swipes is improved so that the screens slide better from the edges. For this new beta, you will need to have version 5.7 of the Qt GUI toolkit.

Convergence from another point of view

The KDE model is an interesting approach to the trend of convergence. After the bad results of the mobile version of Windows and the eternal wait for a full version of Ubuntu Touch, it seems that instead of entering to compete with them have preferred to bet on a tool that can be exploited by developers of both platforms.

In this way they ensure that they can be present regardless of which operating system finally gets a solid convergence, something that will help with future moves that also allow development for Android and iOS in addition to Windows and GNU / Linux. We will have to follow closely the movements of the project to see how far they can get there.