You are here HomeGeneralThe stories behind the brands

There are some brand names that are so familiar and such a part of our cultural consciousness but we don’t often stop to wonder who was behind the success of the name. Companies that were founded some time ago often carry the name of a founder who has long since been forgotten. But their name lives on in the marketing of today. Let’s take a look at some of these famous brands and who was behind their conception:

McDonald’s is a hugely successful global fast food chain with a brand that is instantly recognisable and a logo etched into everyone’s mind. Maurice and Richard McDonald are the men behind the brand. They had moved to California from New Hampshire to work in Hollywood in 1928 but they weren’t really charismatic enough. So they set up a hamburger stand. They then went off to manage a theatre but sold it in 1940 to open another burger stand in Pasadena. For eight years they perfected their ideas for a self-service food operation and eventually opened up in San Bernadino. They only had four simple items on the menu but were cheap, speedy and clean and thus a franchise was born.

Hilton is a world leader in hotel hospitality and the first was set up by Conrad Hilton in New Mexico in 1907. The family business of a general store was struggling and so six of their rooms were converted into lodging. After the finances were restored, he went into politics for a while but soon returned home. He started his town’s first bank but then had to go off and fight in WWI. After the death of his father, he returned from the war and returned to the hotel business. The first one to carry his name was in 1925 in Dallas, Texas and the rest is history. For a Brand and Strategy Innovation Agency, visit www.lightbulbinnovation.com/.

Colonel Sanders still has his face on KFC restaurants around the world but who was he? Harlan Sanders spent most of his life as a street car conductor, railroad fireman and insurance salesman. In 1930 he started cooking chicken in a small restaurant in the rear of a service station he ran in Kentucky. This is where he perfected the blend of 11 herbs and spices which are still used today and are still a secret. He was made an honorary Colonel in 1935 for his contribution to the state’s cuisine. He traveled over 250,000 miles a year promoting his chicken and still appeared in commercials until his death in 1980 at the age of 90. 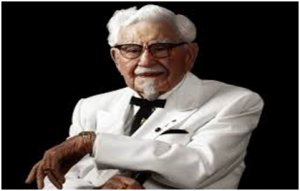 Dunlop is a name we all know and the man behind the brand was John Dunlop. Belfast in the 1880’s had terrible streets pitted with granite and tramlines so when his 10 year old son pleaded with him to make his tricycle more comfortable, Mr Dunlop said he’d try his best. John Dunlop was a vet but didn’t let that stop him from having a go. He made a tyre, they tested it on 28th February 1888 and it was a resounding success. He patented his design and within 6 months, the new tyre was being used on racing cycles.