You are here HomeGeneralIt’s all about the spoons

When you are sitting in a nice restaurant surrounded by the beautiful Restaurant Cutlery that has probably been provided by heritagesilverware.com/category/cutlery it I hard to imagine that human beings have been using some cutlery items for centuries. The oldest type of cutlery is in fact the spoon. Spoon style cutlery was used alongside carved wood sticks used to spike meat and cook it over a fire clay dishes to serve the food in and even rocks that had been sharpened to use as simple knives. 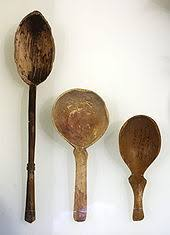 Many ancient civilisations used the oval shaped dish attached to a handle of some description for a variety of tasks including serving food, mixing it and then finally eating it. In the early millennia the spoons would have all been made form similar materials and the design the same with some of them just being made with larger ovals or larger handles depending on the requirement for their use. Nowadays it is thought that there are over fifty different type of spoons that are used both in domestic and commercial settings for preparing, serving and enjoying food. These can include ladles from serving soup, spoons for stirring cake mix, soup spoons to enjoy your starter and desserts spoons to enjoy your sweet as well as many, many more.

It is thought that some of the earliest spoons, some examples of which have been found, were used in a ceremonial way by Egyptian Priests and Pharoahs. They were made from wood, slate, ivory and flint and were decorated with various symbols and hieroglyphs along with detailed drawings. They were often used in religious ceremonies and other important events. Spoons became a common place cutlery item for the wealthy upper classes in both Ancient Greece and Rome and were taken around the world during the reign of the Roman Empire where they were usually made from silver. 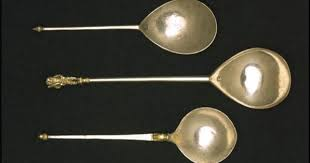 During medieval times the spoons were made from cow horns, brass and pewter and were being used more regularly for eating food. It was still the upper classes that had the more ornate and long-lasting metal spoons with the lower classes then having access to the earlier wooden varieties that were less sought after by the wealthy. The type of spoon that you used helped to cement your status and was an indication of both your wealth and power. After the coronation of the Kings there was a special anointing ceremony where a special spoon was used.