You are here HomeGeneralCelebrities Who Should Have Avoided The Knife

Cosmetic surgery is an accepted part of the celebrity lifestyle, with stars of all ages and backgrounds choosing have a little nip and tuck to improve their appearance and help them succeed. From breast implants to nose reductions, tummy tucks to Botox, more celebrities than ever are coming forward and admitting that they have had surgical interventions. 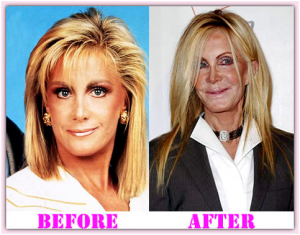 Historically, people were very reluctant to admit that they had been under the knife. Today, it’s less stigmatised, so celebrities are more comfortable admitting that they have been to see a cosmetic surgeon to change something about their appearance. However, for some unfortunate celebrities, the final results were not quite as expected. All through the news, the public regularly see pictures and footage of celebrities who have taken their cosmetic procedures too far, suffered complications or just generally come away from the clinic looking worse than when they entered it. For some people, the results of their decision to go under the knife had regrettable consequences, or they simply wish they had never done it.

Rock singer Courtney Love was famous for her dark lipsticks, worn to enhance her natural lip shape and make her mouth seem fuller. Eventually, she went for a surgical procedure to have her lips enlarged. However, she later said that she regretted interfering with her body and wanted her ‘old’ mouth back.

Television actress Dana Delany is someone whose regrets regarding her cosmetic surgery came from a mishap and problem arising. On the advice of her dermatologist, Delany went and had Botox injections to smooth the lines of her forehead. However, the practitioner hit a nerve in her face which has caused her eye to become droopy on one side. She says that prior to the procedures, she had a symmetrical face – and this is something that she no longer possesses. In the event of accidents like this, most reputable clinics will have a process in place to help correct the problem.
Heidi Montag

A star of reality television, Heidi Montag underwent one of the most controversial cosmetic operation packages in recent history. Starting with a breast enlargement, the actress ended up having ten procedures all within one day. She too has said that she now regrets the changes she made.

Famous model Carmen had a breast augmentation and found that she regretted it. In an interview, she said that despite the fact it was nice to no longer need to wear push up underwear and bras, she feels like she should have just left her body alone to change naturally. Though she did not have an abdominoplasty Essex visitor Carmen had a naturally slim figure, which made her enlarged breasts seem disproportionate.

It’s not just women who have cosmetic procedures. Singing star Kenny Rogers has had a lengthy career on stage and felt that he was showing his age, choosing to go under the knife to rediscover his youthful looks. However, he too says that he doesn’t like all of the things that he has had done to his face.